I haven't yet gotten any submissions, so I'm still reduced to mining other blogs for exposed waygooks.

This one, from Blackout Korea, looks almost like it would qualify as sexual assault. That's why I "noised" the victim's face, so the he wouldn't know it's himself and therefore would not likely press charges. That leaves me free to keep the pitcher's identity as he himself submitted it.

Posted by kushibo at 7:46 PM No comments:

Since I lack submissions so far, I'm mining Monster Island and other blogs for exposed waygook photos. This one is actually from a five-year-old post from January 2006.

I'm not sure if the guy was trying to expose himself, but there certainly were plenty of people there to expose him. (Please think of a funnier caption than that.) 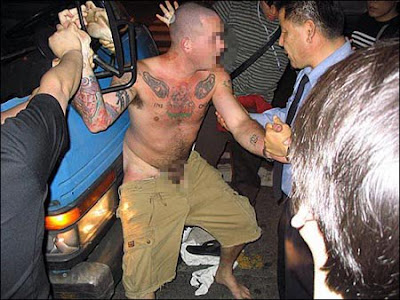 The story behind this guy can be found in various places (including the above link). During last year's ATEK death threat, this guy's case inexplicably came up when Stephannie White quoted the following:


What I always told my soldiers when in Korea is that the best way to stay out of trouble is to avoid places where it would most likely happen, particularly certain university areas such Hongdae especially at night. Also it is best to avoid areas where ajushis are known to get drunk and stupid. A few years back certain students from the Hongdae area were actively looking to provoke an incidents with GI's after their success with the Shinchon Stabbing Incident. It appears it may be the same thing now with English teachers.

This, of course, was utter nonsense, as I pointed out:

They had also provoked him to jump on top of a taxi in a fit of rage prior to the knife incident. It seems to me the best way for some people to avoid trouble is to stop hanging around themselves.

Ah, crap. Now I'm sounding preachy. And the EW blog is not about preachiness. It's about waygooks exposing themselves.

Posted by kushibo at 8:55 PM No comments:

Email ThisBlogThis!Share to TwitterShare to FacebookShare to Pinterest
Labels: USFK 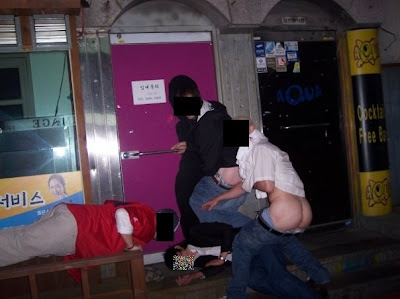 These are from Blackout Korea. If you have pictures like these, I encourage you to send them to me, blacked-out faces or not. Funny captions are welcome, too. But don't actually harm anyone (other than with the image of your private bits seared on their frontal lobe, figuratively speaking). 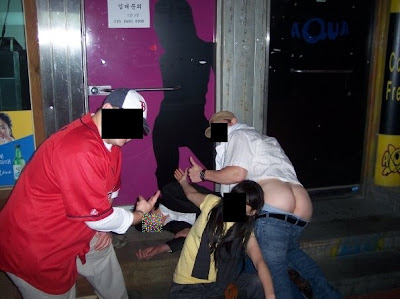 Well, come to think of it, blacked-out faces preferred.

UPDATED:
I decided it would be a little more prudent and a little less hypocritical if I altered these pictures myself to obscure the drunk guy's face. I mean the drunk Korean guy, the one who's passed out. And yes, I realize my choice to "add noise" to the photo does make it look like he vomited a bunch of pixels.

Posted by kushibo at 6:24 PM No comments:

What the eff is this?
(About EW)

Inspired by Blackout Korea, this site is will be a clearinghouse of photographs of 외국인 in Korea exposed in some way (see posts for examples). Got a pic of an exposed waygook? Send it to me. Add a funny caption if you like. If I don't have enough waygooks, I may expand into exposed Koreans. No freaks.